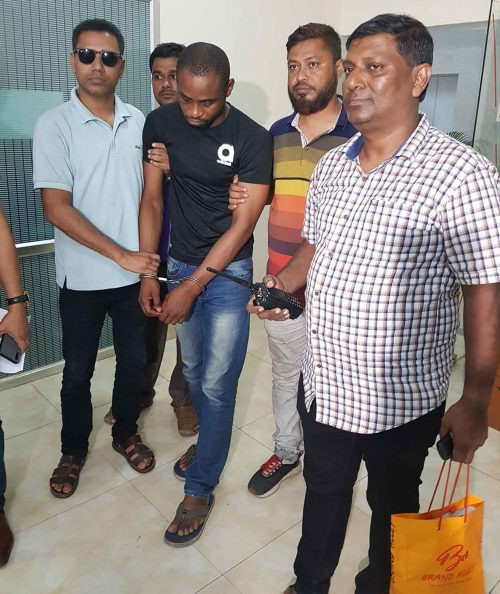 The Appellate Division of the Supreme Court in Bangladesh has upheld a High Court order that approved bail for a Nigerian national, Ajah Anayochukwa Onyeanwusi, on the condition that he surrender his passport.

‘The bail granted to the Nigerian national will continue till the end of the trial,’ Bibhuti Tarafder said.

The Nigerian was arrested with crystal methamphetamine beside a city hotel on June 27, 2019.

Dhaka Tribune reported that Onyeanwusi came to Bangladesh as a student and was admitted to ASA University in Shyamoli of Dhaka.

After getting his bachelor’s degree from the Department of Pharmacy, Onyeanwusi started his own garments business.

Onyeanwusi joined the drug trade in Bangladesh through Darknet, but his trade is not limited to the country. He also frequently travels to Thailand, Malaysia, India, Uganda, Kenya and Singapore – mostly under the guise of a businessman – to buy ice from there, which he later trades in Bangladesh.

Mosaddeque Hossain Reza, additional director (intelligence) of the Department of Narcotics Control (DNC) said acting a on a tip-off, they arrested Onyeanwusi with 50g of ice during a drug drive in that area. Later, upon further interrogation, they recovered 472g of ice from Ajah’s residence in Dhaka’s Bashundhara area.

According to Reza, after primary interrogation, Ajah admitted to being a dealer and also a supplier of crystal meth, in seven to eight countries other than Bangladesh.

On September 30, the High Court approved bail for Azah. Later an appeal was filed challenging the order.

FIFA clears eight players that have represented other countries, to play for Super Eagles

UK dissociates itself from British lawmaker’s claim of Gowon looting half of Central Bank...

Man “pronounced dead” shares testimony on the anniversary of the day that would have...

FIFA clears eight players that have represented other countries, to play...