An 11-year-old girl identified as Glory is currently writhing in p@ins at Police Hospital GRA, Benin, Edo State, after she was allegedly r@ped by a man identified as Collins Odahbor.
.
According to reports, the unfortunate incident happened on Friday, April 29 in Benin. It was gathered that the victim was sent to fetch water by her parents when the suspect, a father-of-two, accosted her, dr@gged her into his house and r@ped her.

A source said, “Glory returned home with her skirt soaked in bl@@d. Her parents interviewed her and she explained that Collins had r@ped her. On hearing the shocking news, her parents launched a manhunt and he was arrested while she was rushed to the hospital for treatment.

However, Collins’ folks who are well to do are trying to b#ry the case claiming that he’s

m£#tallyunstable. He’s presently being detained at Evubuotubu Police Station, Edo State. Please, we need justice for this girl. Her condition at the hospital is t#rrible.”

NB: We can’t post the video of the victim at the hospital here due to IG’s community guidelines. You can click on the link in our bio to watch it. 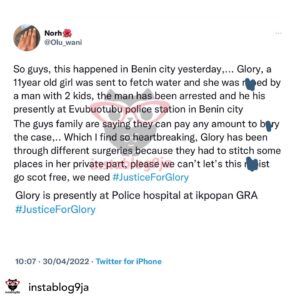