Taylor Swift is facing a copyright infringement lawsuit over the 2019 book that accompanied her “Lover” album.

Lover broke records, becoming the top-selling album of 2019 in its first week.

Now, author Teresa La Dart, whose book “Lover” was published in 2010, filed a lawsuit in the Western District of Tennessee against Swift on Tuesday, August 23, claiming that the singer-songwriter stole the book’s title as well as several of its creative elements.

The author said a number of creative elements from her 2010 book Lover were copied into Swift’s 2019 book of the same name.

La Dart alleges that Swift’s book has substantially the same format and front and back covers as hers as well as a “similarly styled ‘Lover’ title”. 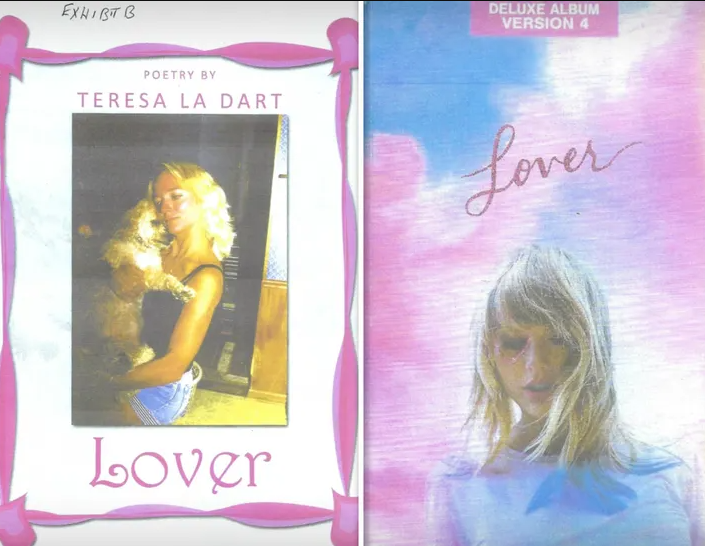 Swift’s book infringes La Dart’s copyrights, La Dart’s lawyer wrote in the lawsuit, and the star now owes in “excess of one million dollars” in damages.

“The defendants to this day have neither sought, nor obtained, a license from TLD of her creative design element rights, nor have they given any credit to TLD … let alone provided any monetary payments,” La Dart’s attorney William S. Parks wrote in the complaint. 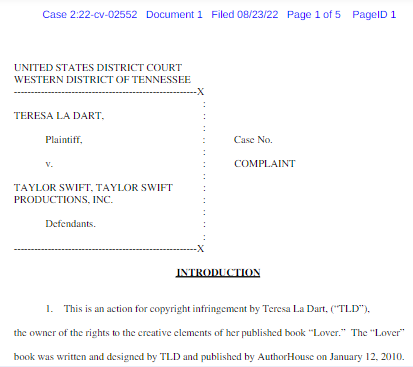 The alleged similarities between La Dart’s book and Swift’s book include covers that both feature “pastel pinks and blues,” as well as an image of the author “photographed in a downward pose.” 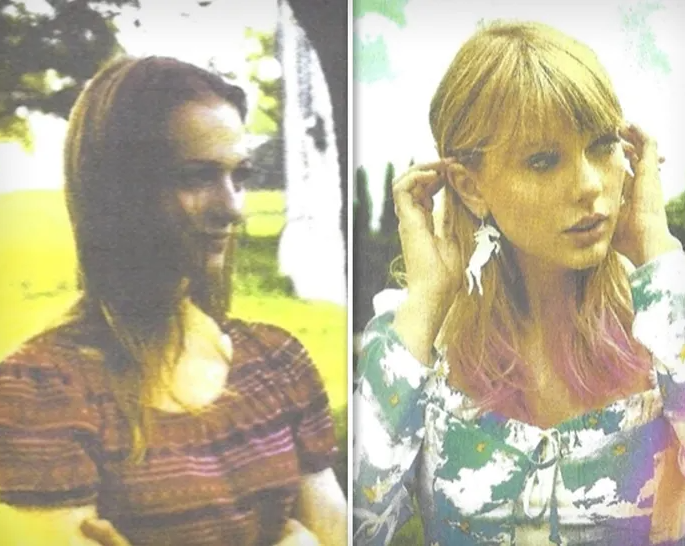 La Dart also claims Swift copied the book’s “format,” namely “a recollection of past years memorialized in a combination of written and pictorial components.”

“As far as I can tell, she isn’t claiming that any of the actual content is similar,” said Aaron Moss, a veteran litigator at the firm Greenberg Glusker who writes about copyright lawsuits at his website Copyright Lately.

“The idea of memorializing a series of recollections over a number of years by interspersing ‘written and pictorial components’ isn’t protectable,” Moss said.

“If it were, this person might as well sue anyone who’s ever written a diary or made a scrap book.”

Moss added: “This lawsuit should be thrown out on a motion to dismiss, if the plaintiff’s lawyer doesn’t think better of it and voluntarily withdraw the complaint first.”

Paul Okoye’s lover, Ivy, brags about him on IG (video)

Paul Okoye's lover, Ivy, took to her Instastories on Saturday evening, December 24, to brag about him. She posted a short video of him and stated that this is no showoff but that he is indeed a good man. Watch below…      View this post on Instagram           A post shared by Lindaikejiblog (@lindaikejiblogofficial)The…

A Nigerian lady, Goodness Zinny, has narrated how a man who asked her out got married to another woman two weeks later.    She stated this on Facebook in reaction to a post about how men sleep with other women while making wedding plans with their main girlfriends. …

Chelsea has reached a €12 million (£11m/$12m) agreement with Molde to sign highly-rated Ivorian forward David Datro Fofana.   Fofana who signed a four-year contract when he joined the Norwegian club, Molde in February 2021, agreed to the deal on his 20th birthday.    Popular journalist, Fabrizio Romano reported that there…

Beggar using fake baby to garner sympathy is exposed in…

A beggar was filmed carrying a “baby” while begging for alms on the streets of Lagos but it was soon discovered that it is a stuffed baby.   A video shared online shows the moment the beggar approached passengers in a private car and began asking them for…